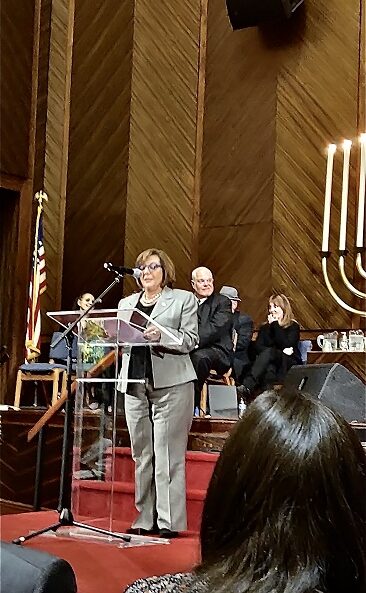 “The history of the Hebrew song, Ani ma’Amin, which means ‘I believe’, is deeply spiritual. I learned the song when I was a child and until last night, I did not know its origin.

“In 1942, Azriel David Fastag wrote the melody to Ani Ma’amin while being transported on a train to the Treblinka concentration camp. Every day, Fastag sang this song in the camps.

“To this day, I try to wrap my head around the magnitude of the atrocities that were the Holocaust and what Nazi murderers and their accomplices did to our people.

“I am of the generation born after this darkness. I learned about the Holocaust from my family – mostly through their silence. I will never forget this most horrific time in human history. The magnificent music that was written, the tremendous talents that were lost and the family I will never know.

“I will own the obligation of this legacy, and pledge to remember it for all of my life.”