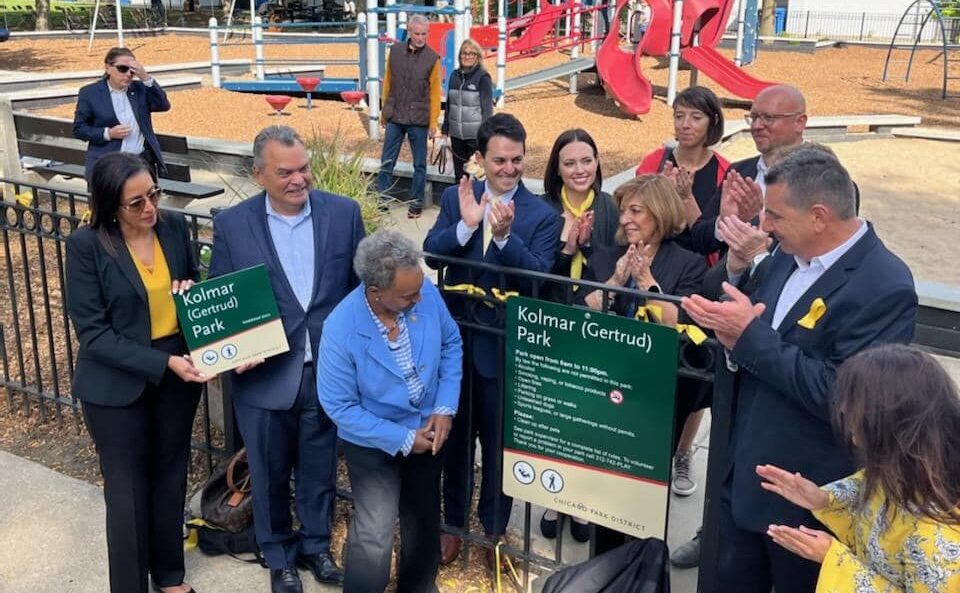 Nearly two years of advocacy and petitioning by the Old Irving Park Association, Jewish organizations and even Kolmar’s own living relatives led to the Chicago Park District’s vote in April to officially rename the park. Thursday’s ceremony will bring the community and Kolmar’s family together to honor the late celebrated poet who was separated from her family by Nazis in 1941 and killed in the Auschwitz concentration camp in 1943.

“I am honored to be present for this historic commemoration,” said Senator Feigenholtz (D-Chicago). “By coming together to preserve a history in danger of being overlooked, we honor Gertrud Kolmar’s legacy as a community and can teach our children about her story for years to come.”

Originally named after Kolmar Avenue, the street it sits on, Kolmar Park is now officially recognized as Kolmar (Gertrud) Park. Gertrud Kolmar, born in Germany in 1894, is survived through her works of more than 450 poems, three plays and two short stories. She continued writing poetry during the war until her arrest by the SS in February 1943, even detailing the persecution she faced for her Jewish identity in a series of letters to her sister between 1939 and 1943, according to the Jewish Women’s Archive.

Feigenholtz supported the rededication push, spearheaded by community members and the Old Irving Park Association, which gained international support after Block Club Chicago’s reporting. The effort received recognition from the Illinois Holocaust Museum, the Auschwitz-Birkenau Memorial and Museum in Poland, and even Gertrud Kolmar’s own great-nephew, Paul Chodziesner, who now lives in Australia. He will attend Thursday’s ceremony along with members of the community and local officials.

“Everyone has something to learn from Gertrud Kolmar’s story,” said Feigenholtz. “Even facing persecution, torture and death, she remained steadfast in her creativity and found hope in crafting poetry that touched on topics from feminism and justice to salvation and her heritage. While she never received such recognition for her work while she was alive, documenting the histories of her family and uplifting her legacy today is perhaps the best way we can connect with our past.”

Visit the Shalvi/Hyman Encyclopedia of Jewish Women for an in-depth biographical record of Kolmar’s life.